The Archaeological Institute of America (AIA) is the world's oldest and largest archaeological organization. The AIA is a nonprofit founded in 1879 and chartered by the United States Congress in 1906. There are more than 100 local societies, like this Jacksonville Society, in the United States, Canada, and overseas. Members include professional archaeologists, students, and enthusiasts, all united by their passion for archaeology and its role in furthering human knowledge.

Professional archaeologists who are AIA members, have conducted fieldwork worldwide. The Institute has founded research centers and schools in seven countries and maintains close contact with these institutions. AIA Members are dedicated to the greater understanding of archaeology, the protection and preservation of the world's archaeological resources, and the support of archaeological research and publication.

Our speaker presentations take place at noon, in Building 51 at the University of North Florida, Jacksonville, (1 UNF Dr, Jacksonville, FL 32224)  AND/OR on Zoom.  The lectures are free and open to the public. After the lecture,  complimentary refreshments may be served in the Physical Anthropology Lab. On Saturdays, parking is free and the staff/faculty/vendor spaces are open to everyone. 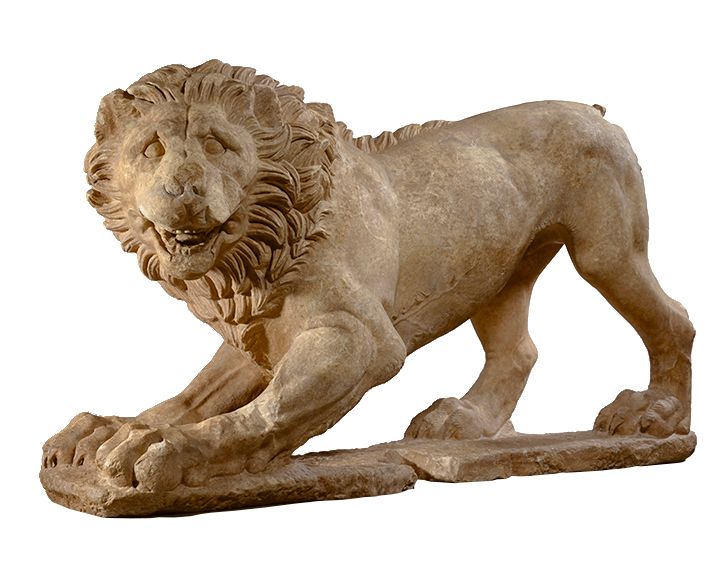 Modern scholars scoff at Herodotus because he said real lions existed in ancient Greece. Was he right after all? Myths and art are not good enough proof. Even a few real lion bones could be the remains of imported pets, or pelts. Since the 1970s, however, this picture has totally changed as more and more Panthera leo bones have been unearthed all over Greece. Combining different kinds of evidence, Nancy R. Thomas, Professor Emerita of Art History at Jacksonville University, gives us a new, lion’s eye view of life in ancient Greece.

A donation of any amount helps us with speaker presentations. Just click the secure “DONATE” button below to use your credit card or PayPal account.

All of us enjoy the speakers and presentations that showcase the fascinating scope of archaeology in these exciting times of discovery and technological change. Your gift assists with expenses incurred by the visiting scholars and archaeologists at our events.

Thank you for your consideration and support!

Connect with thousands of members who share your passion for archaeology.

Participate in local events through an AIA Local Society.

Members like you support excavation, preservation, outreach, education, advocacy, and the professional activities of the AIA. 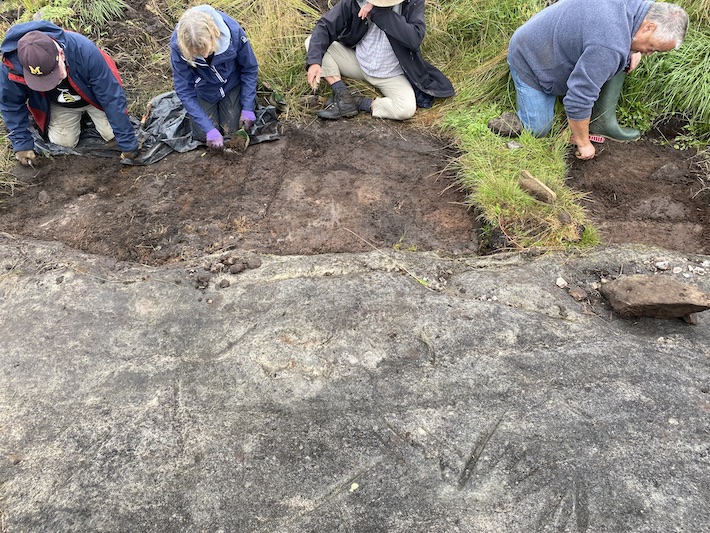 STIRLING, SCOTLAND—An area of abrasive sandstone in central Scotland may have been used as a giant whetstone by Neolithic toolmakers, according to a BBC News report. Volunteers and Stirling Council archaeologist Murray Cook removed a layer of turf from the sandstone and recorded 33 U-shaped grooves, or polissoirs, where stone axes are thought to have been polished some 4,500 years ago. Cook suggests that people may have come from miles around to sharpen and smooth their tools at the site. To read about recent investigations at Scotland's Caerlaverock Castle, go to "Storming the Castle."  (Photo courtesy of Murray Cook)

ISTANBUL, TURKEY—According to a Gizmodo report, narrative scenes thought to have been carved some 11,000 years ago have been discovered in southeastern Anatolia at the site of Sayburç by Eylem Özdoğan of Istanbul University. The five figures, found behind benches lining the walls of a Neolithic building, include two apparently male humans, a bull, and two leopards. One of the men is holding a snake or rattle in his right hand, while the other is holding his own penis. Özdoğan thinks one of the humans and the bull make up one scene, while the human flanked by two leopards make up a second. The building is thought to have served a communal purpose, he added, noting that the carvings may reflect a collective memory. Read the original scholarly article about this research in Antiquity. To read about the 11,000-year-old stone circles at Göbekli Tepe in Turkey, go to "Last Stand of the Hunter-Gatherers?" 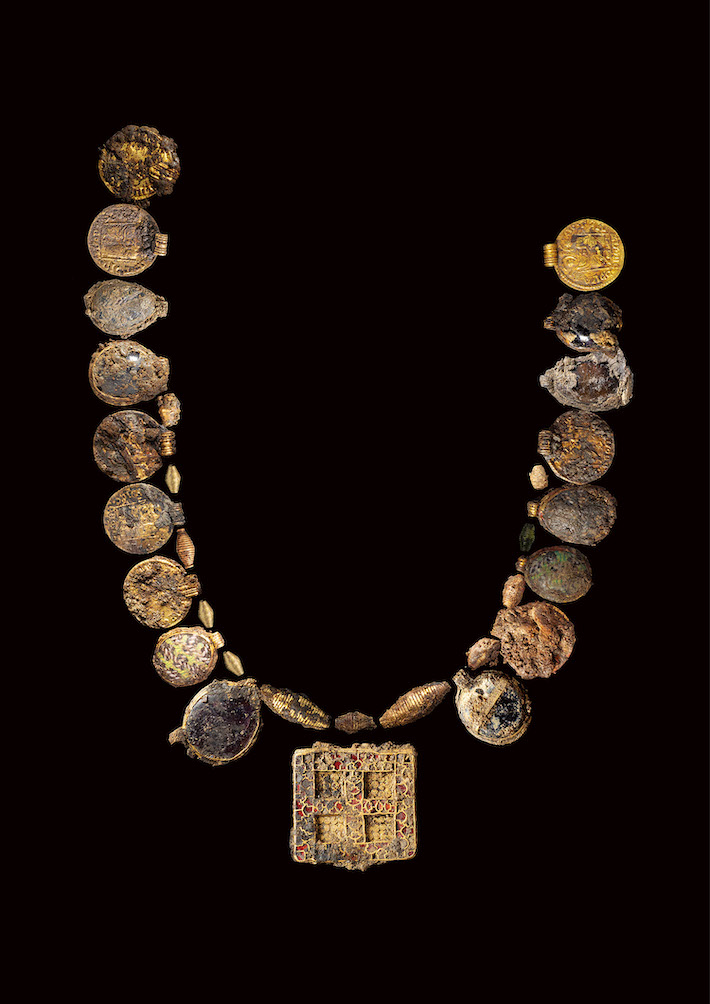 NORTHAMPTON, ENGLAND—BBC News reports that a gold necklace dated to between A.D. 630 and 670 was discovered in a grave in England’s East Midlands by a team of researchers from the Museum of London Archaeology, who were investigating a site ahead of a construction project. Only tiny fragments of tooth enamel from the human remains in the burial have been preserved. The necklace is made up of at least 30 pendants and beads made of Roman coins, gold, garnets, glass, and semiprecious stones. The centerpiece of the necklace is rectangular in shape and features a cross motif of red garnets set in gold. Team leader Levente-Bence Balazs and his colleagues think the pendant may have been recycled from a hinged clasp. Two pots, a shallow copper dish, and a cross elaborately decorated with silver human faces were also recovered from the grave, which may have belonged to a royal woman, or to an early Christian abbess. To read about a peculiar find in a woman's burial that was unearthed at a German monastery, go to "Medieval Female Scribe," one of ARCHAEOLOGY's Top 10 Discoveries of 2019.  (Photo © MOLA/Hugh Gatt) 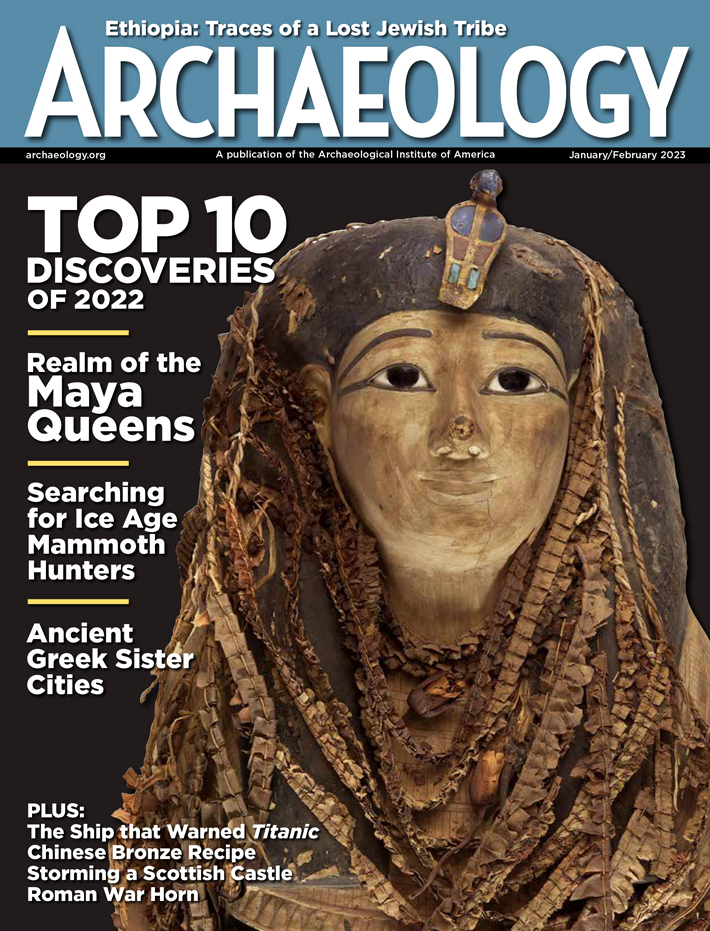 Top 10 Discoveries of 2022
ARCHAEOLOGY magazine reveals the year’s most exciting finds
Jungle Realm of the Snake Queens
How women ascended the ranks in the highstakes world of Maya politics
Twin Cities
The unbreakable bond between allies across the Aegean is commemorated in a newly unearthed inscription
High Plains Mammoth Hunters
A chance discovery in Wyoming leads archaeologists to a unique 13,000-year-old hunting camp
The Falcon God's Shrine
An unprecedented find in a thriving Egyptian port